A friend of mine once asked what age her son with autism should be before engaging in job readiness.

Right now. Do not pass GO. Build the skills necessary for employment and an increasingly independent life so your child can collect his $200.

Establish a vision. Make your plan. Work it.

When my son Liam was first diagnosed, communication, following directions, social interactions and eventually gaining employment seemed so far away from our daily reality. But step-by-step with one small goal after another, he achieved meaningful employment at age 16. 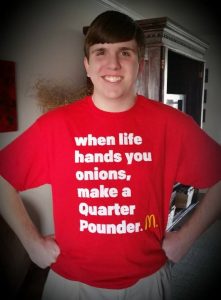 Everything he learned was a building block for the next step. Learning to communicate through listening, then following directions, eventually brought forth words followed by conversation.

At age 13, while we were in the car one day, he pointed and said, “I want a job at that McDonald’s when I turn 16.” For the first time he set his own goal complete with a time frame. This particular McDonald’s PlayPlace is where we spent countless hours growing skills learned in occupational and speech therapies, motivated by Coke and French fries.

Every goal met, every single time, no matter how tiny, whether at home, school or that McDonald’s was a step in the right direction. I worried if three years would be enough time to teach him to be both job-ready and safe with young managers unfamiliar with autism supervising him. Because he was a really fast runner, I had visions of him running straight to Disney World after taking out the trash without close supervision. 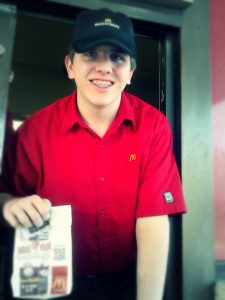 Our team crafted a plan, then collectively spent over 1500 hours working on job skills. We photocopied 200 applications until he could complete them independently and made him smell the dumpster trash in all its sour milk glory on hot summer days until he did not gag. We conducted 29 fake interviews at various McDonald’s so he would ace an interview at his preferred restaurant. We taught him how to not yell at people who like onions on their sandwich. I called our local McDonald’s District Office for two months straight until I discovered what assistance existed for individuals with exceptionalities. We met with management at his preferred site and prepped them on what to expect prior to employment, then remained engaged with them to address issues that developed on the job.

Liam worked for 8 years until the 2020 pandemic. The skills, achievements, and acceptance he experienced during his tenure there, emboldened him to reach for a new goal: to own his own baking business. We have developed a logo, marketing & business plan, practiced recipes, and gained 12 pounds each but we believe every step will eventually lead to success.

Everyone has a purpose.

Creating a safe environment for Liam to operate within independently contributed to his maturity, hope for his own future and sense of dignity. All people perform better at jobs that they love and are well suited for based on their skill set that are rooted in safe environments – including individuals with autism spectrum disorder. When communities and families work together, creativity and inclusion can abound and become something amazing!

Do not despise small beginnings. Be patient and grow them…. whether you are the person with autism, the parent or caregiver, a teacher or therapist or employer. Success takes time, trial, error, failure, regrouping, perseverance, and attention to detail – but all true successes in life do. 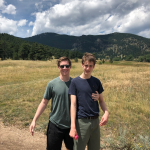 Those Facing the Challenges of Autism Need Our SupportParents, Research, Uncategorized
X