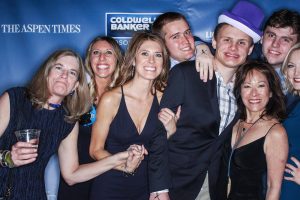 Side bar:
Just to fill you in on a little history, World Autism Awareness Day is officially April 2 every year thanks to a United Nations declaration in 2007. The UN encouraged Member States to take measures to raise awareness about people with autism internationally. Autism organizations around the world commemorate the day with awareness and fundraising events. Light It Up Blue, a campaign by Autism Speaks, lights up iconic structures, buildings and monuments throughout the world in recognition of autism. Autism is often associated with the color blue. In the spirit of World Autism Awareness Day, Ascendigo Blue Aspen lights up our town during the height of the ski season on Presidents’ Weekend.

What started as the brainchild of a few ambitious moms of autistic kids eight years ago has grown to be the well-known signature event of Presidents’ Day Weekend in Aspen. This year, Ascendigo Blue Aspen (formerly Light It Up Blue Aspen), Ascendigo Autism Services’ lively, premier fundraising event will take place on February 17 at 7 p.m. at the Belly Up Aspen highlighted by curated cocktails and dinner stations, special guests, a live auction and concert by Vintage Trouble.

In late 2011, Ascendigo Founder and Board Chair Sallie Bernard, together with Jill Pidcock, Allison Johnson and Erin Rigney, collaborated on a way to raise autism awareness as well as funds to help families affected by autism in the Roaring Fork Valley. “We said, ‘Wouldn’t it be cool to light up Aspen Mountain?’” Sallie explained. So, on April 2, 2012 — World Autism Awareness Day — Ascendigo (formerly Extreme Sports Camp) launched the first Light It Up Blue Aspen event at The Little Nell. Aspen Mountain’s Little Nell run was awash in blue light. The following year the base of the Little Nell run was lit with a blue puzzle piece as event guests wined and dined inside the hotel.

Given that the ski season winds down by early April and ski conditions can be variable, the decision was made to move Light It Up Blue Aspen to the busy Presidents’ Day Weekend in 2014. The venue changed to the Hotel Jerome to accommodate growing attendance. So, blue lights shined on the Hotel Jerome as the rousing 2014 event was held in the ballroom with John Popper of Blues Traveler taking the stage. Special guests included Jacqueline Laurita of The Real Housewives of New Jersey. Light It Up Blue was held at the Hotel Jerome in 2015 and 2016, as well. Last year, the iconic Belly Up Aspen turned up the volume and switched on the blue lights for the event.

Other special guests throughout the years include TV actress and autism advocate Holly Robinson Peete, Max Burkholder who played the role of a kid with Asperger syndrome on the TV drama Parenthood, and environmental and children’s health activist Robert Kennedy Jr.. This year’s special guests are journalist and Emmy Award television producer Caren Zucker and veteran network news correspondent John Donvan. Zucker and Donvan have co-authored the best-selling, 2017 Pulitzer finalist book “In a Different Key: The Story of Autism.” “We always try to bring in special guests with a connection to autism”, Sallie said.

The success of Ascendigo Blue Aspen grows every year thanks to the efforts of the hard-working host committees and the generosity of sponsors and donors. Julie Manning, whose daughter Olivia has attended the Ascendigo’s Summer Adventure Camp and its ski program over the years, has been a very active member of the host committee working diligently to obtain highly sought-after auction items for the event. “This program has really touched Olivia’s life. It’s something we look forward to every year and I want other parents and kids on the spectrum to feel that,” Julie said.

Initially, half of the proceeds from the annual high profile event went to Autism Speaks. As of 2016, all proceeds benefit Ascendigo Autism Services.
Why the name change from Light It Up Blue Aspen to Ascendigo Blue Aspen? “By incorporating ‘Ascendigo’ into the title we generate more awareness of our organization and further establish the event as uniquely ours,” Sallie explained.

The name and venues have changed over the years but there has always been a constant. “You’re having this amazing evening while supporting a great cause. It is such a fun night,” Julie said. 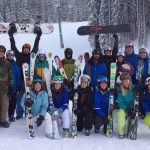 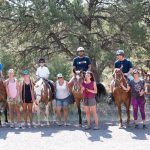